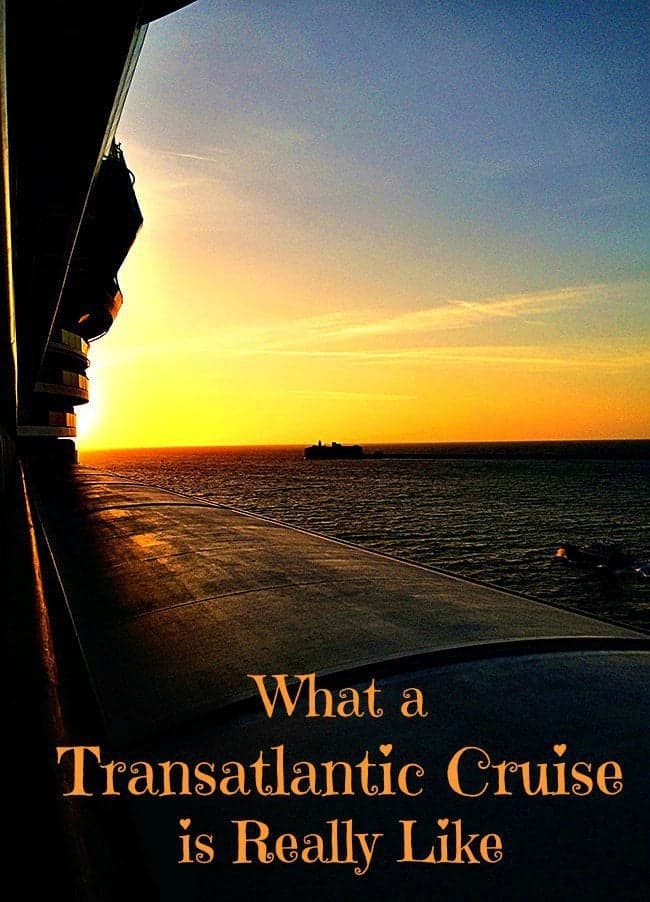 I am starting almost in the middle of our travels and going to the end of the cruise. Don’t worry, I’m editing up the pictures of our room on the Royal Carribean Cruise and going to give you all the details and my thoughts. This post just sprang up and wrote itself. Almost.

This isn’t the usual type of travel post I write here on the Kitchen Magpie, but in the past two weeks after taking our very first transatlantic cruise with Royal Caribbean I have been asked more times than I can count what was it really like. Every time I mention the cruise – as it’s how we got to Europe instead of flying so it comes up in conversation with strangers all the time – people perk up and want to know. Again today I was asked by other people who love cruises and haven’t yet taken one so I figured I’ll start in the middle and try and tell everyone what it’s like.

So here it is. What a Transatlantic Cruise is Really Like!

While you don’t have to take a two-week cruise like we did, plan on at least 7 days with an ocean liner (more to come on ocean liners when I actually take one home in a couple of weeks!) and that is seven straight days at sea. Our cruise was ten days at sea, which made for a long, relaxing haul across the ocean. We had booked this cruise knowing that we had plenty of time to relax.

2) Transatlantic Cruises are Meant For Relaxing. They Aren’t Exciting.

I’ve seen a lot of reviews on transatlantic cruises where people have stated that they are bored by the fifth day. My darlings, you are on the ocean for ten straight days and while cruise ships are pretty spectacular, there is only so much that they can do. I read an entire series of books. Stock up your Kindle and enjoy!

3). Transatlantic Cruises Are a Lot Of Views of Water

You are at sea for a long, long time without seeing land. However watching a sunset over the ocean? Simply spectacular. This one I managed to catch out the window at dinner. If you choose a dinner time close to sunset, you are going to be treated simply the most unparalleled sunset views in the world.

You, the ocean and the setting sun. Magical.

4) The Weather on Transatlantic Cruises Can Be a Little Rough

H’ok. I am not trying to scare you off, but holy crow, there was one rough night and morning that scared the bejeebus out of me. The waves were so high that they had to close the fifth level deck and I literally didn’t sleep all night because I kid you not, I was rolling in bed. Like full-out rolling. I finally propped a spare pillow behind my back and slept halfway on my side and grabbed a few hours in the morning.

The best part was breakfast. The breakfast buffet is on the 11th level and the waves were still pretty darn bad. While we were sitting and eating, the ship rocked so that my son was facing the ocean and I had my back to it. His eyes widened and he let out a “Whoa!”! However, when the ship tilted back the other way and it was my turn to face the ocean I swear to the good Lord above I almost peed my pants. I was looking out these wide windows and the horizon disappeared and all I saw was waves coming towards me. Then plates started flying off tables. I kid you not. It must have over compensated for the tilt somehow, because it was crazy tilted.

However the seasoned travellers didn’t even blink an eye. I was a limp, weak mess after that point.

Have you seen The Poseidon Adventure? I did when I was a kid. I managed to ignore it until that one big tilt…and that entire movie came rushing back into my head.

Now, this isn’t meant to scare you, but it’s a warning of the weather that you might encounter. The good news? The ships can totally handle it, no problem. You just need some Gravol or similar motion sickness meds just in case.

4) Transatlantic Cruises Can Have Some Amazing Ports

We sadly had to cancel our Disney transatlantic because we arrived in Europe far too late for Mike to get all of his meetings with clients done, but that cruise had Iceland as a port. We didn’t suffer, ours had Norfolk, Virginia, Cork, Ireland. Bruges, Belgium and Cherbourg, France as ports. I love that you can “test” out areas to see if you want to return. We definitely have Ireland as a return!

Did I just say that? Me? Oh yes I did. Fourteen days on the same ship and you have to learn how to mix up your food or man, you are just not even going to want to chew. Seriously. While you can have breakfast in the dining room, you usually hit the buffet on the ship. I soon learned that you want to only have ONE thing at breakfast, like oatmeal and fruit, instead of a plate with little bits of everything. That way you can vary what you eat every morning and not get tired of food. Have eggs and bacon one morning. Have bread and cheese the next. My other advice is to definitely enjoy the seated dinner every night. The food will change enough that you won’t get tired of it. We only paid for two “extra” restaurant experiences and that was because Mike and I desperately wanted ramen and the Izumi restaurant on Brilliance of the Seas had a fantastic ramen.

7) Some Advice? Make sure you chose a ship that has the types of entertainment you want.

We travelled on the RCI Brilliance of the Seas, an older Brilliance class ship that holds around 2000 people. The newer (and more expensive) Quantum series will have more bang for your buck for entertainment but also holds around 5000 people. Those ships are monsters! We have the choice between the Quantum or the Brilliance and chose the Brilliance since the price difference was quite substantial. I’m also not into boarding ships that are really new, I’d prefer they worked out the kinks before I headed out into the middle of the ocean. Just me.  We wanted to read and relax. If that’s not your idea of fun, then you might want to look into a ship that has more bells and whistles.

Now it’s question and answer time! Ask in the comments below anything you want to know and I’ll try my best to answer them!