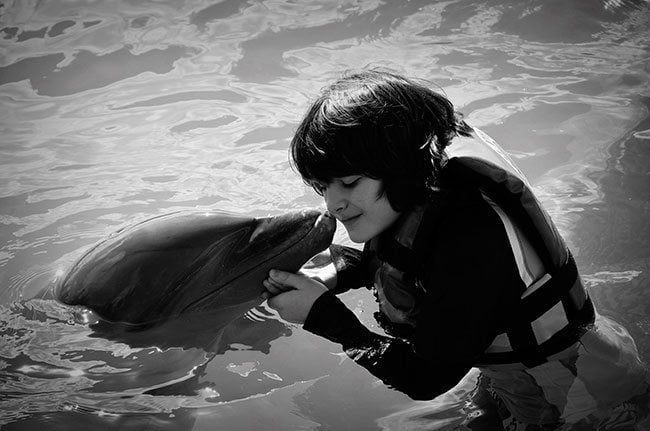 When you are on your Disney Cruise, you will have the chance to explore the ports that you stop at and choose an excursion. I want to be clear that these excursions are NOT Disney excursions but private companies that pair with Disney to offer you a chance to safely explore the port. I’m saying this now, because I’m going to do a little bit of complaining later on, which is rare for me but I really feel it’s important for everyone to know!

We chose the Dolphin Extreme Swim paired with the turtle farm for our day out on Grand Cayman, a birthday present to our daughter who is in love with dolphins. Needless to say, it was costly but we figured hey, all four of us will go in the water and swim with dolphins, when’s the next time we will get to do that?

The encounter itself was amazing and we all had plenty of time with the dolphins, in fact, we had two dolphins because Mama had an 11 month old baby with her as well, who was so adorable! He was trying to learn all the tricks just like Mama and was such a cute little stinker! My daughter could barely hold herself together she was so darn excited! We all got to kiss the dolphin, swim with them, pushed on a boogie board and more. It was so fabulous!

We knew that we would have a chance to buy the photographs once we were done our swim and we hurried up in the dressing rooms to make sure we had time to check them out.

Here’s where I got a wee bit disappointed.

You are basically held hostage when it comes to those photos and I’ve traveled many, many places my friends and done many touristy things. The entire package for a family of four was $180, which, had I been happy with the photo quality, would have been a bitter pill but I would have swallowed it.

However, the picture quality was horrible.

This is the original photo of my Rose from the disk they gave us. Completely washed out, no color, blurry..sigh. 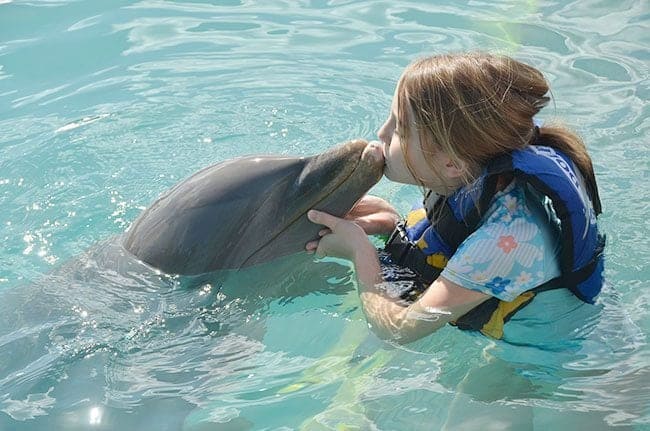 Here’s a unedited photo from my sister’s photos. See the difference in color and sharpness? She had a disk full of much better photos while mine were all washed out like the one above. 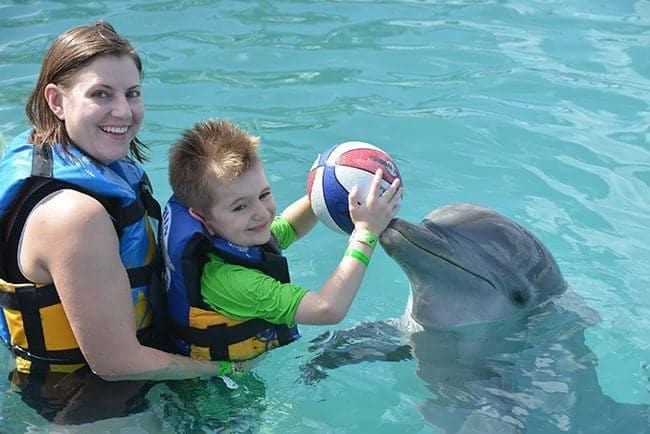 I’m not happy with it and it’s the ONLY picture I have of her kissing the dolphin. Her dream come true.I had to turn it black and white, which every photographer uses as a last resort to salvage something. 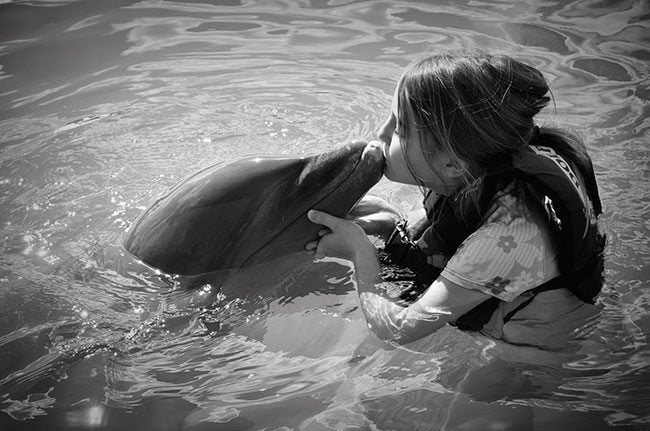 To add to it, our pictures were the worst of everyone else’s pictures. I could see other people’s pictures and realized that we got stuck with someone who doesn’t know how to take pictures very well.  I politely asked the girl helping us if they could give us some money off, telling her honestly that the picture quality was very poor, that I wasn’t an expert but I was pretty good at getting decent photos and that I was very disappointed in their quality. I also mentioned I was going to have to fix all the pictures, meaning hours of work for me from someone’s careless 10 minutes of photos.

I received a very snarky” I take pictures too, and those are just fine.”

Fine, time for a manager.

That encounter didn’t go much better, except that he admitted that we didn’t have a good photographer and that he could take $30 off. In fact, he argued with me until I showed him examples of everyone else’s pictures on the computer’s around me that were taken by other photographers and only THEN did he offer money off.

Thirty dollars for the hours of work that I have already put into these pictures, never mind the hours I have yet to do when I get home.

Listen. Good customer service means that if you BORK UP SOMEONE’S FAMILY VACATION PHOTOS YOU MAKE IT RIGHT AND YOU DON’T ARGUE WITH THEM!

Here’s the thing, I wasn’t trying to get them for free. I actually asked for the two person family price, which was still $120. I figured that since I had to do half the work, then let’s cut the family in half and really, $60 for my editing time? Sigh.

The actual experience and the trainer in the water (excepting the photographer) were amazing, but the staff in the shop I am going to have to give a resounding thumbs down, they were outright rude and snarky,  the pictures are highway robbery and if you are like me, you have to purchase them anyways, even if they are blurry, washed out etc because this was your daughter’s dream come true and you have to try and salvage them.

Argh. Not what you want your family’s port excursion to be, is it?

However, my daughter was happy and it makes my heart smile. (BTW, all the dolphin pics have been edited by myself, sharpened and turned black and white.) 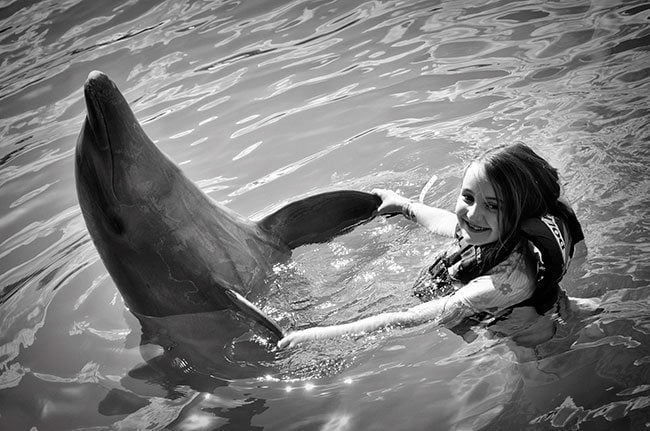 Once the dolphin encounter is done, you can venture over to the Turtle Farm, which is amazing. We had SO much fun picking up the turtles and at one point the kids got into their swimsuits again to wade in a small pool with little turtles! Can you imagine the heaven my daughter was in! 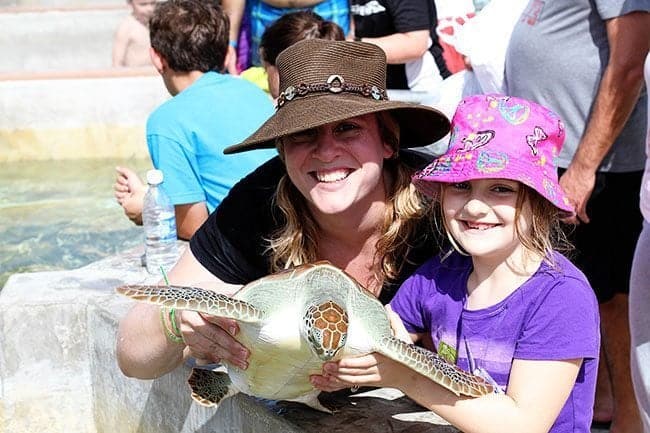 Mr K loved the turtles just as much as his sister, how could you not? If you tickled them under the chin, they would calm right down and sit there with you. 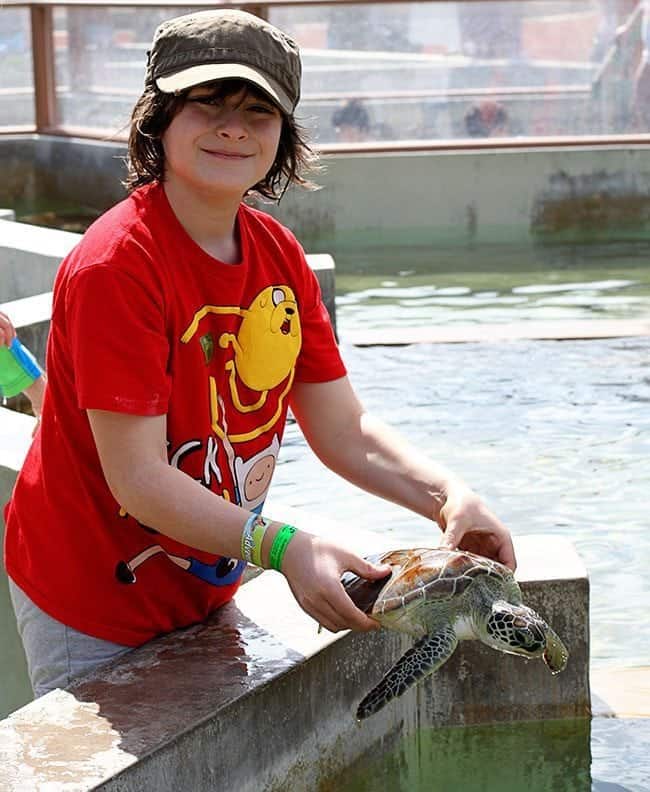 Cousin D was right in there as well! 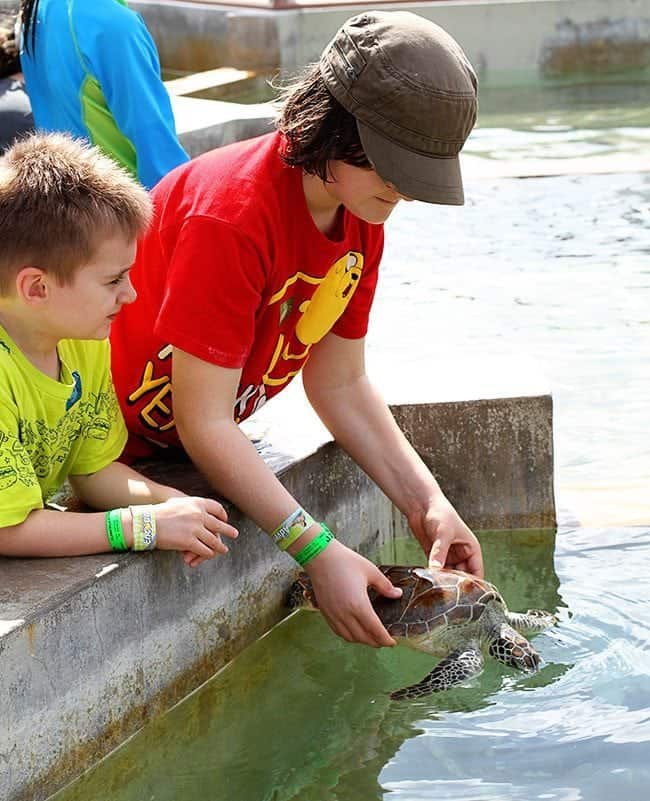 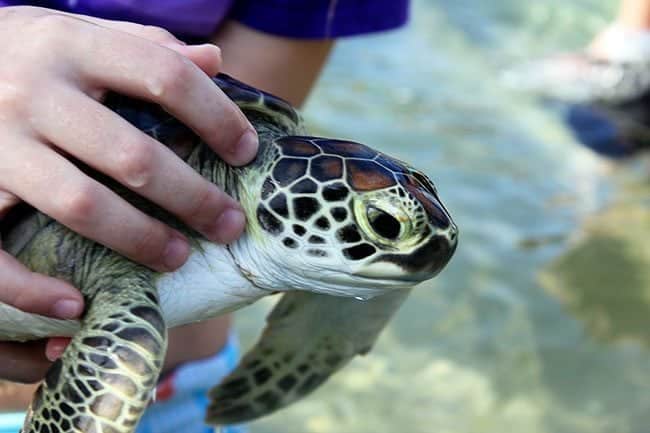 So all in all the experiences were great, the staff was rude and the pictures are highway robbery. Beware the pictures!  Rarely do I write negative reviews, so I am sure that you all can imagine what it would take rudeness wise to get me to post one! In fact, this might be my first one ever, I think. What a distinction.

I hope this helps anyone deciding on this shore excursion or not, I would have loved to be warned about the poor picture quality when I was depending on someone else to capture these important memories properly for me. I would have rather handed them $180 and taken the pictures myself, at least I would have had good quality ones to treasure. Make sure you ask if they are going to make sure the picture quality is good and if not, stand up for yourself.

Ten Things That Will Surprise You On Your Disney Cruise

What is There for Kids to do on Cruise Ships?