This pie crust is hands down the best pie crust recipe out there, and it’s worth the time and effort of making pie crust at home! This recipe yields 6 pie crusts that you can portion out and freeze for later use!

To fill your beautiful pie crust, why not make my new blueberry pie, or a classic Lemon Meringue Pie or try this retro recipe for Cream Cheese Pineapple Pie!

This is the Tenderflake recipe, but my US readers have a hard time getting that brand unless you pop to Canada to buy it (it would be worth the trip for a suitcase full). So for clarity, I am writing this up as a separate recipe and going to just call this a LARD based pie crust, you don’t have to have the exact brand (but if you can get Tenderflake, it IS the best!)

This recipe gives you the very best possible pie crust to be used in all of your favorite pie recipes. It is versatile and works well with pretty much any filling, and is even good just eaten cooked with sugar and cinnamon and broken apart if that’s your preference. We don’t judge.

The best butter you can find are only around 80% fat and the rest is water, which produces steam – not what you want for the crispiest pie crust. You don’t want to steam them.

Lard is almost 100% fat—mostly monounsaturated, trans-fat free and has a much higher melting point. Lard literally crisps up like deep frying your pie crust, without the steam and creates those air pockets and layers of pastry perfection!

It is also a lot healthier than shortening and is actually lower in saturated fat than butter!

Make sure you look at the recipe card at the very bottom for the exact amounts.

How To Make The Best Pie Crust Recipe

• Whisk together flour and salt

• Combine the vinegar and beaten egg in a measuring cup

• Gradually stir the liquid into the lard, just until it clings together

• Gather the dough and divide into 6 portions, wrapping and refrigerating for 30 minutes or freezing for future use

• Roll out each portion on a lightly floured work surface

• Transfer the prepared dough to a pie plate and then trim, flute, and decorate as you like

How To Cut The Lard Into The Flour

One immediately frustrating aspect of making a pie crust is trying to cut the fat into the flour.

Every recipe for pie crust ever just says to cut it in, with no explanation as to what that actually means!

Cutting the fat into the flour means breaking up the fat into smaller and smaller particle sizes by cutting it, either with a pastry cutter or 2 knives.

As the fat gets smaller, more flour wraps around each individual piece until you end up with a crumbly mixture that should have the texture of slightly wet sand.

This not only makes it really easy to mix the wet ingredients into the fat and flour mixture in the next step, but it also helps disperse the fat evenly throughout the mixture.

This even dispersal of fat makes the baking process a lot easier, as the pie crust will cook more evenly. Even better, the fat will melt all throughout the dough, giving the best texture possible.

How To Decorate & Flute Your Pie Crust

Pie crusts may just be a simple sheet of dough to serve as the carb and solid bottom layer of your pie, but that doesn’t mean they have to be ugly.

The very best pie crusts have plenty of beautiful adornment all along the edges. It isn’t just about looks; a prettier pie crust tastes better, and that is a fact.

To flute your pastry, which means making those distinctive, pie-like little crenulations all along with the outside roll of the pie crust, you first need to trim it properly.

Make sure you layout your pie so that it fits snugly into the pie dish, with very minimal overlap over the edges.

Anything that hangs over the side needs to be cut off and reserved until later.

To flute the edges using the most classic method, which is known as a “scalloped crimp,” you just push your index finger down onto the pastry’s edge and use that finger and the thumb of the other hand to pinch the pastry.

This pinching bunches the pastry up and creates little divots that are not only attractive but they can actually help the filling stay in place and cook evenly.

Looking for more delicious Pie recipes? Try these out:

Enjoy! Let me know if you have any luck finding a good lard in the US, just leave a comment in the comments section below for everyone!

I have tried them all, and this truly is the best pie crust recipe! This is the only pie crust that my Grandma would use.
5 from 7 votes 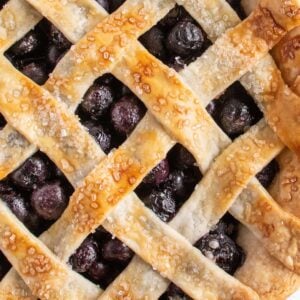