What is Mirepoix? How to Make Mirepoix and What It’s Used For

Mirepoix is another one of those seemingly incredibly fancy culinary terms that crop up all over the place in online recipes.

Whether it is your favorite cookbook or a fancy French recipe, there is bound to be some sort of mention of mirepoix somewhere in there, assuming it is a savory dish.

But what is mirepoix, what is it used for, and why is it considered such a standard in most western cooking? 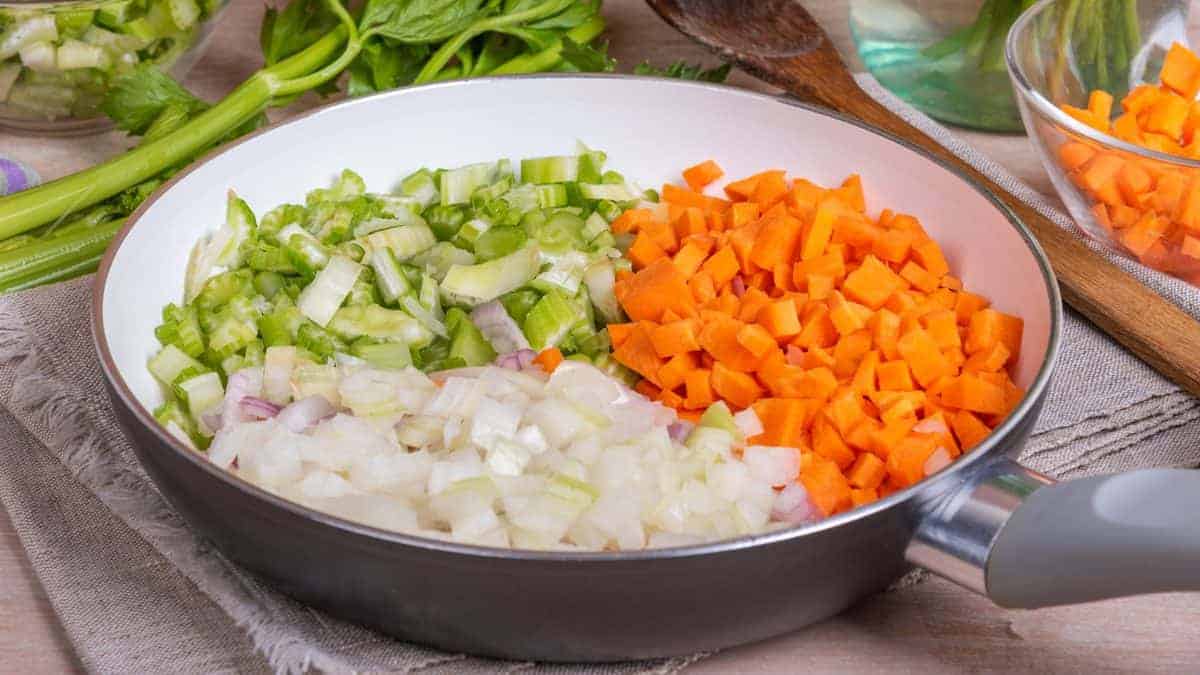 Despite how endlessly fancy it sounds, mirepoix is simply the French name for the standard mix of vegetables found in most savory dishes.

Traditionally speaking, mirepoix is made from a ratio of two parts onion, one-part carrot, and one-part celery.

These traditional ingredients are diced to small, evenly sized pieces and sautéed over a low flame for about 10 to 15 minutes, usually with a fat like butter or oil.

The reason for the prevalence of mirepoix in most cooking is because it adds a solid vegetable base of flavor for other ingredients to build off of. You can expect to find mirepoix as the base flavor profile of most soups and stocks, as well as many sauces.

While mirepoix specifically refers to the concept of gently cooking the mixture until softened and lightly sweetened, it is also generally used to describe the blend of onions, carrots, and celery that are typically used.

This means that you will often see recipes requiring mirepoix, but completely skipping the step of gently sautéing them in fat.

However, a great cooking tip is to generally always sauté your mirepoix, regardless of what the recipes tell you to do. Unless you are planning on eating these cut up vegetables raw, slowly cooking them over a low flame with plenty of fat is a sure-fire way to ramp up the flavors and create something truly delicious.

Additionally, mirepoix is not the only flavor base out there – there are plenty of other blends of vegetables used in similar ways in other cooking traditions.

What Are Other Flavor Bases There?

While the mirepoix is perhaps the most well known and frequently used blend of vegetables for flavor bases, other cultures around the world use all kinds of different blends.

For example, in Spain, they make a sofrito made from gently braised onions, garlic, and tomatoes, as well as in Turkey, where they use tomato paste instead.

In Germany, many local cooks make Suppengrun, which is a blend of leeks, carrots, and celeriac for a super nitrogen rich flavor punches.

In Poland, they make the impossibly difficult to say włoszczyzna, which is leeks, carrots, celery root, and parsley root.

Finally, perhaps the other incredibly popular variety of the Creole holy trinity, which consists of onions, celery, and bell peppers. You wouldn’t get very far with a gumbo or Creole soup without some holy trinity.

But why is mirepoix still so popular? What is it about mirepoix that makes it so attractive as a flavor base for so many dishes?

But Why Do We Use These Vegetables In Mirepoix?

The reason why we use onions, carrots, and celery as the very specific vegetables in mirepoix is pretty simple at is base; they taste really good.

Both onions and tend to get sweet and delicious when cooked slowly, which contributes a gentle sweetness and tanginess to any dish. The reason this happens is due to the high levels of natural sugars found within these vegetables, which get released after cooking them slowly for a little while.

If you were to just chuck them into a stock, they wouldn’t leech out their all-important sugars as easily. If you have ever tasted an onion after using it to flavor a stock without cooking the onion first, you will likely have noticed that it is remarkably sweet – it needs direct heat on its cell walls to release its sugars.

Celery is a bit different from its two mirepoix cousins, as celery contributes something a bit different. While the term sometimes inspires a bit of fear in people, the chief reason celery gets included in mirepoix is nitrates.

Nitrates, the tasty compound that is found in all manner of things from gunpowder (potassium nitrate) to preserving bacon (sodium nitrate.) While there is some suspicion over the potential health risks that directly ingesting too many nitrates can add, the fact is that they add a great depth of flavor to any savory dish.

When you add all these three vegetables together, you get this sweet, umami-rich mush that tastes wonderful and contributes so much flavor potential to dishes. Very commonly, the next step after preparing your mirepoix is to cook tomato puree or tomato paste into the mirepoix.

This creates something called a pincage and lends this massive quantity of caramelized, sweet, tangy and savory flavors that makes anything you cook it with absolutely amazing.

So, the next time you read a recipe that requires you to chop up and prepare some mirepoix, do so with confidence. You can now not only reliably understand how to prepare it, but also why you are doing it in the first place.