The Differences Between Club Soda, Seltzer, Sparkling Water and Tonic!

Carbonated water is one of those things that really shouldn’t be confusing, but it can certainly be hard to get your head around the different types out there. We’re talking about club soda, seltzer water, sparkling water, and tonic too! They’re all just H20, right? So why do they taste different? And what are the differences between them? Let’s have a look.

What is Club Soda?

Club soda is made by infusing carbonated water with added minerals. The water itself is carbonated with C02 (carbon dioxide gas – i.e. the culprit for all those burps!). Wondering what kinds of minerals they add to your club soda to give it that salty taste?

Well, the usual additions include sodium chloride, potassium sulfate, sodium bicarbonate, and disodium phosphate. But the minerals used and the amounts that are added is always down to the manufacturer or brand. The variation in the minerals used is why you probably have a preference for one brand over the other. One of my favorite cocktails to use club soda in is a Pomegranate Gin Fizz but it goes great with vodka too and a simple Vodka Soda always goes down well!

What is Seltzer Water?

Seltzer water first originated in Germany and it was so popular that the immigrant Europeans brought it over to the US.  Seltzer is carbonated like club soda so it’s often used as a substitute in cocktails, but it doesn’t have any added minerals so it tastes more like “real” water. Personally, I just think of it as water that’s been carbonated! The main difference between seltzer and club soda is the lack of minerals in seltzer because this means you can add any flavorings you like without changing the taste.

I’m a fan of adding some fresh lemon, citrus, or lime and it’s a really good blank canvas for making cocktails. You’ll always find bottled seltzer in the store that’s been flavored with various fruit and oils that can be enjoyed on its own and not necessarily in a cocktail mix. I quite enjoy my wife’s Anne of Green Gables Raspberry Cordial poured over a seltzer to give it a sweet raspberry taste.

What is Sparkling Mineral Water?

There are pretty strict regulations on the sale of sparkling mineral water and the FDA cites that it has to have at least 250 parts per million of dissolved solids from its original source (and not added later) to pass their standards. The amount of minerals in sparkling mineral water depends on the source where it’s been bottled, but they include minerals such as sodium, calcium, magnesium, to name a few. Similarly to club soda, the variety of mineral count and type means that each brand tends to have its own custom taste.

What is Tonic Water?

Tonic water is the outlier here. Although it’s carbonated and contains lots of added minerals like club soda, it tastes very different. The main reason for this is that it contains something called quinine. This is a compound that comes from the bark of cinchona trees and it was added to water many years ago to prevent malaria. But quinine is REALLY bitter, and thankfully (back in the 19th century) some good soul realized it could do with a bit of sugar and carbonation to make it more drinkable. Which is how we wound up with the tasty tonic water you drink today. It definitely has the most identifiable and unique taste of all of the water we’ve listed!

Another thing differentiating it from the other types of water is that it contains calories from the sugar added. Tonic water actually makes a really good addition to cocktails because of its strong flavor, especially vodka and gin-based drinks. And it goes great with lemonade and juice too.

So now that you’re all up to date on the differences between each type of water, what cocktail are you going to make first?! I am about to shake up a Vesper Martini (not stirred!) but I might need a lot of water in the morning if it’s a large one! 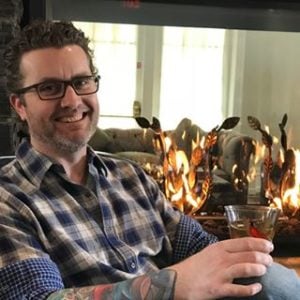 Hey everyone! I'm Mike (Mr. Kitchen Magpie). When I'm not sharing cocktail recipes here and on my Instagram (@mrkitchenmagpie), I'm enjoying a nice bottle of scotch in a vintage glass from my barware collection.

Hey everyone! I'm Mike (Mr. Kitchen Magpie). When I'm not sharing cocktail recipes here and on my Instagram (@mrkitchenmagpie), I'm enjoying a nice bottle of scotch in a vintage glass from my barware collection.