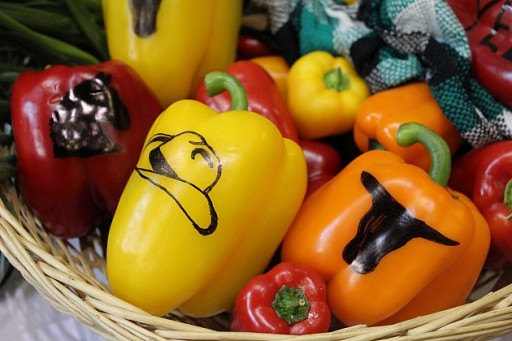 I had been crossing my fingers, waiting to see if I received an invite to judge the Downtown Chili’s Association annual Chili Cook-Off. I had judged it last year and simply had the best time ever.

Once I got over my nervousness about being in front of a large crowd, meeting new people and finding my way around downtown.

This year? HAH! I was a pro. I was ready. I knew where to go, what to do and at least one person who was going to be a judge again with me. No prob, Bob, I had this covered.

Once again, teams cooked up their best chili, hoping to win the coveted title of Ultimate Chili.

We had some Moose chili from these very spirited, proud Canucks.

Some incredible team spirit and ingenuity from the Four Points. 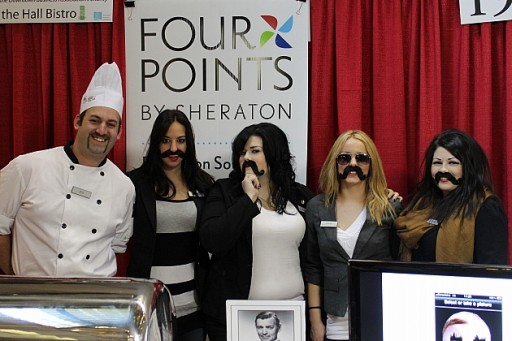 Some good times from CKUA Radio. 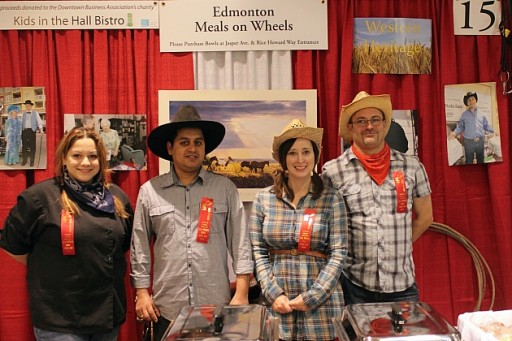 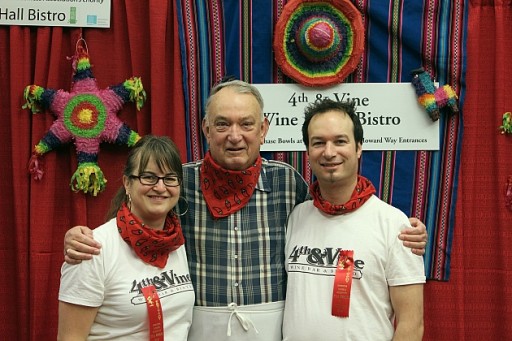 …upon chili! These guys (not pictured) n’ dolls won the Best Booth Prize. 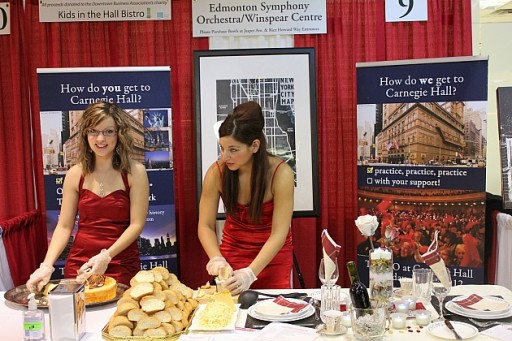 L2 took home The Ultimate Chili this year after coming in second place last year. It was the People’s Choice as well, so there was no doubt in anyone’s mind this year that they indeed had the Ultimate Chili. Chef Shane Chartrand isn’t pictured here but I have nagged him for the recipe to the chili. If I managed to weasel it out of him I will most definitely share it. It won me over with the wonderful chick peas in it, something I use in mine all the time but rarely see in chili’s  outside my own kitchen. 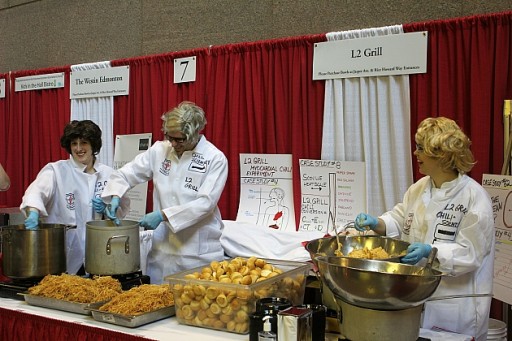 The Hardware Grill placed second in the contest. And if you’re wondering how I managed to get a picture of myself, while taking the picture, you’ll probably realize that I couldn’t have. This photo was posted on CBC Edmonton’s Facebook page. There are more pictures there for you to view. Please ignore any that have me in them. Ungh. Don’t people realize the blogger is the one who’s supposed to take the pictures, not be in them? 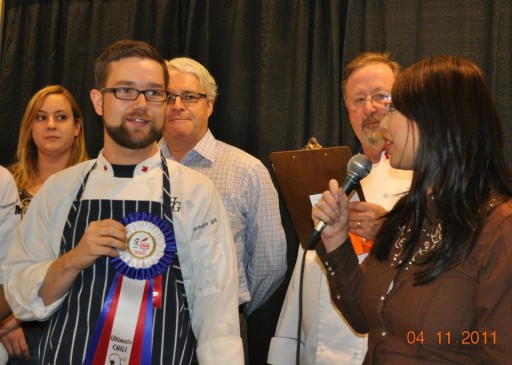 The handsome gents from the Westin. Their turkey chili took third place and it was fabulous. 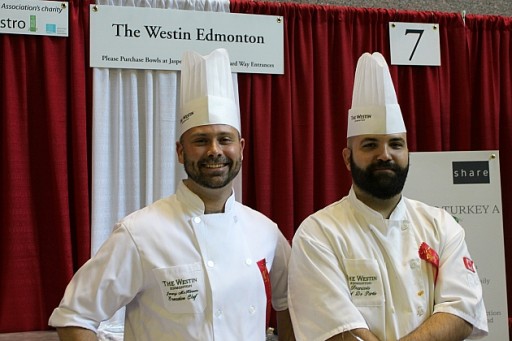 My fellow judges were a riot this year and a great time was had by all.

I met Richard Helm, editor of Food and Books for the Edmonton Journal. 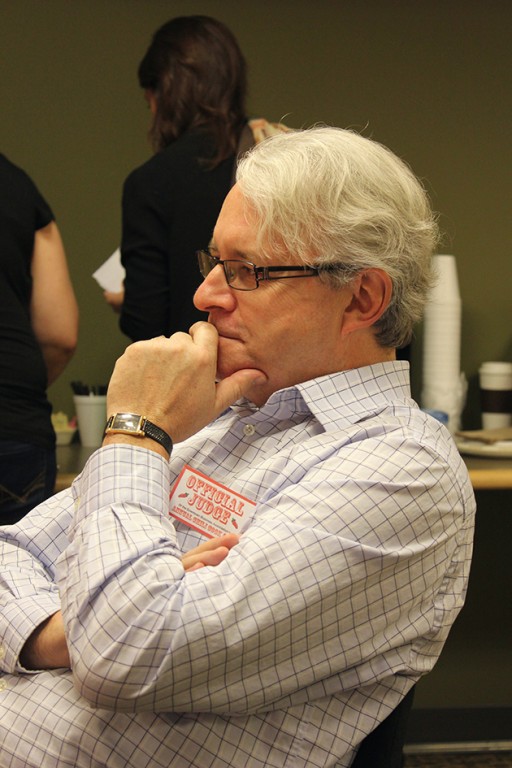 And Mark Suits , who has the best job EVER. Not only is he the Assistant Digital Editor for The Edmonton Journal but he blogs about all things beer.

I want his job. Well, sorta. I just want to taste all the beer but not actually have to write about it or work or anything like that. Maybe I’ll just start drinking more beer at home.

It’s the Canadian thing to do. 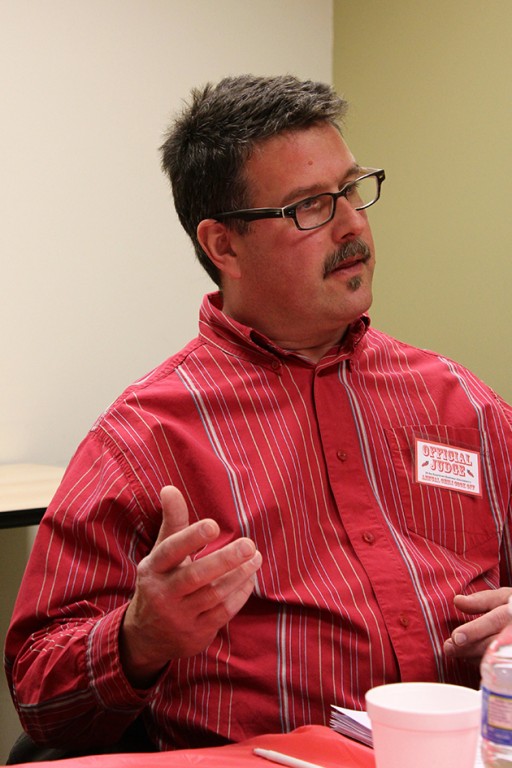 And I met Kelsey Danyluk, who opened up TZin Wine and Tapas here in Edmonton. I am going to have to stop by and let her educate me about wine one night.

And Stanley Townsend, the chair of culinary arts at NAIT.  Besides knowing him from last year, he was the chef for my mushroom cooking class that I took at NAIT this fall.  If you have a chance, I highly suggest you take that class. I am considering the spring class as it will be new recipes to suit the new season of mushrooms.

All in all it was one fabulous time and already I am hoping to attend next year!

The Kinda Chili’d Out Magpie