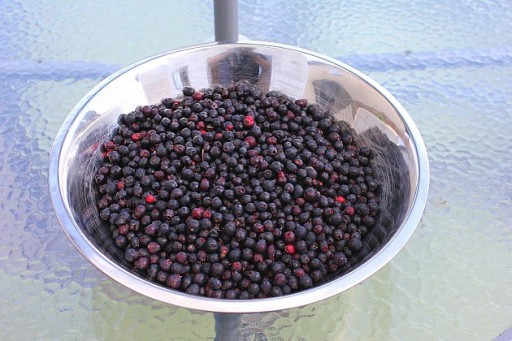 Ah summer in Edmonton. Festivals galore, the sunshine that won’t stay longer than 10 minutes and a river valley that is a bounty of food to be found. We have been picking the Saskatoons in the River Valley almost as long as we have been living here. I wasn’t sure how long, so I went to look.

I made the mistake of looking up the first year we picked Saskatoons in our river valley, which I blogged on my kid’s private blog.

And completely depressed myself. It’s bad enough seeing my tall, going-into-grade-three boy as a small little 2 1/2 year old all excited with his first bucket of Saskatoons…oh..those little chubby hands and that hair that curled so… 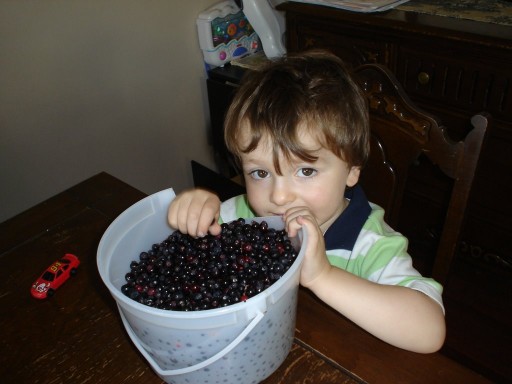 ..but THIS just about killed me. I took this picture when we were out picking berries.

Oh. My. God. She’s 6 months old. Her cheeks are so chubby they are almost edible. That hair she had from birth. The nose. Those fat cheeks again.

MY BABY’S GOING INTO GRADE ONE IN FOUR WEEKS AND SHE USED TO LOOK LIKE THIS!

‘Scuse me while I go weep for a bit. Sometimes I would like to go back for just one more day, for one more squeeze of those cheeks, to have cuddles while I am nursing her, just to smell that baby smell. 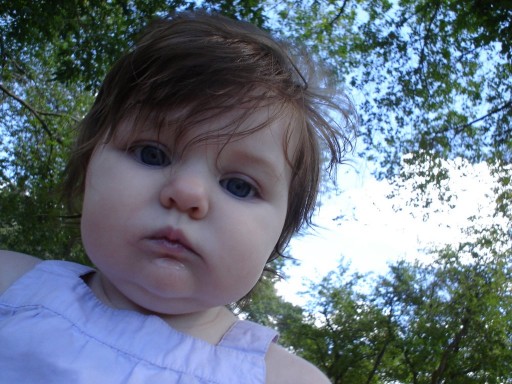 Good Lord, that was a mistake.

Forgive me for my mush fest, now on to what I was actually talking about. Saskatoons! We have been picking  yearly in the same area for 5 years. Five years! Holy smokes! I couldn’t actually believe it when I looked it up.

Look at those beauties. 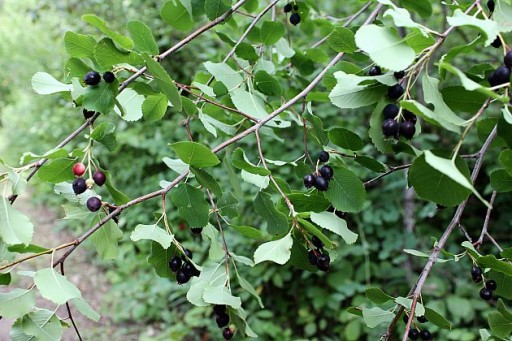 This girl is like her aunt and I. Pick till ya drop! She was hardcore today. 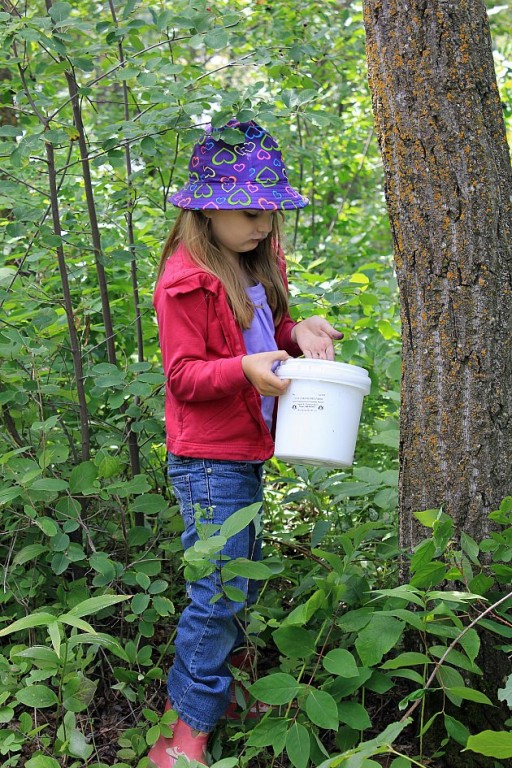 Now to make a short story long, what I discovered today is a patch of Saskatoons that taste exactly like the ones we picked in Manitoba with my Grandma.

Oh yes indeed, Saskatoons all taste different. I cannot remember how many different varieties we are blessed with in the River Valley alone in Edmonton, but there are a lot.

I would taste each tree before we picked and I couldn’t believe how bland some were compared to the others!

I discovered that the ones that were the size of your pinkie nail and bursting with juice are tall, slender trees, not bushes. They weren’t wide, I was bending trees down that were a good 11 feet tall, with hardly any greenery and not lush with berries, but oh my, the berries that were on them were simply the best.

They were all in one area too, which I now have mapped in my head for next year.

These tasted like my childhood. When I first popped them into my mouth I thought “there it is”.  I tasted my grandmother’s homemade pies and Saskatoon perogies, of which I have never met the match. And perhaps it IS the variety of berry that made the difference!

So. Who can tell me what variety they are, because these are what I want to plant in the new house. Tall slender trees, not a bushy variety and large, juicy berries without too much seediness to them. 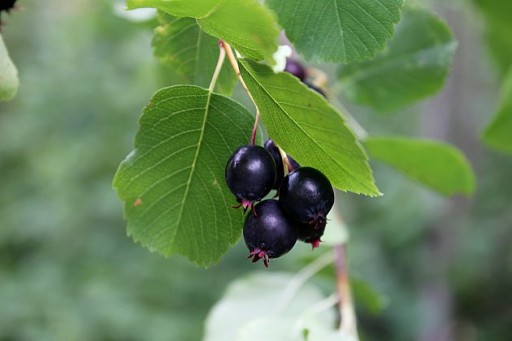 My boy was right in there too, but then he had fun doing boy things like finding sticks and making his sister mad. 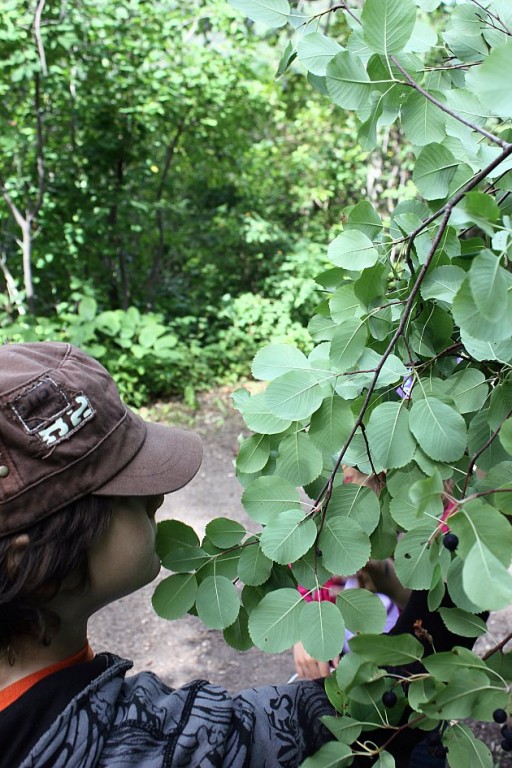 See how large those berries are in relation to her hand? HUGE! 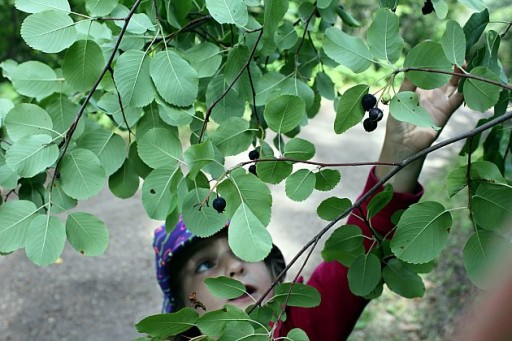 A mushroom for Kevin. What’s this? Grew in a fairy ring. A BIG fairy ring. There were a few mushrooms pulled out of it like this one.

I completely sani-wiped my hand in case it was poisonous. I am paranoid. 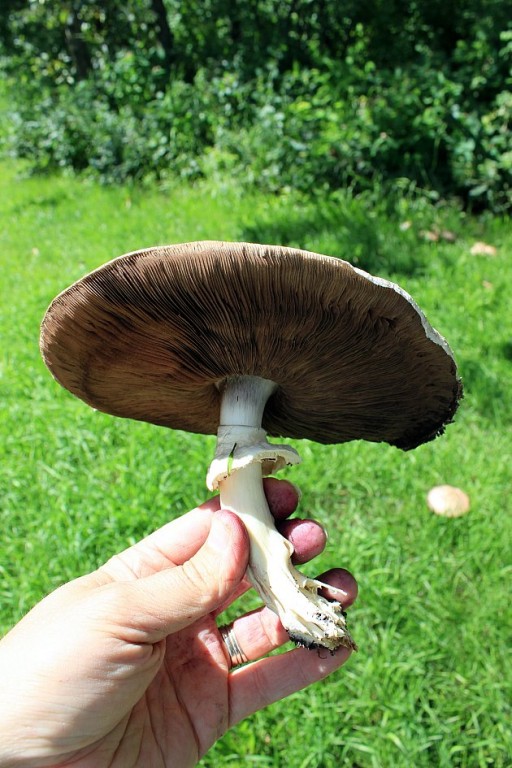 I think there was a mushroom hunter in our area. All sorts of mushrooms were up-ended like this, I only took the two pictures because we were on our way out, but I saw some white ones under a pine, and again, only ONE was picked like this.

Ah, you can’t go along the river without throwing some stones in. 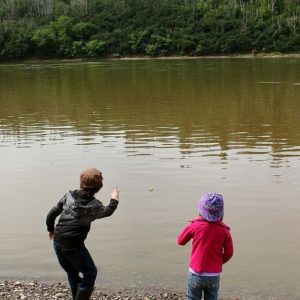 Wild raspberries for lunch too! They aren’t plentiful enough to pick, but just right for snacking. 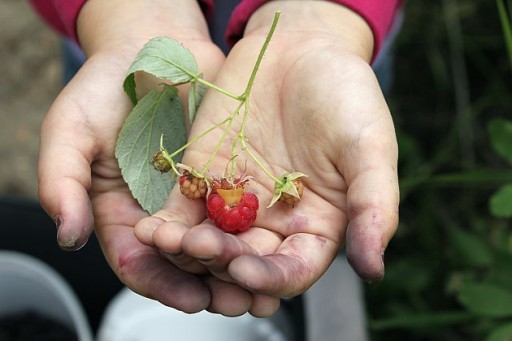 Home, where we proceeded to eat. And eat. Then eat and bake with Saskatoons. 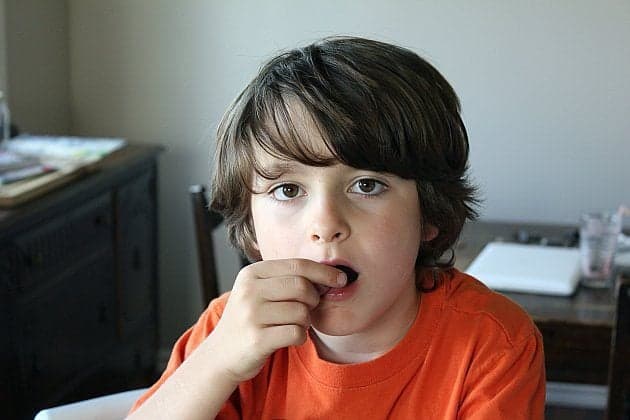 This picture is hilarious. I think he got a bug.

Seriously. That’s a “I just ate a bug” face. 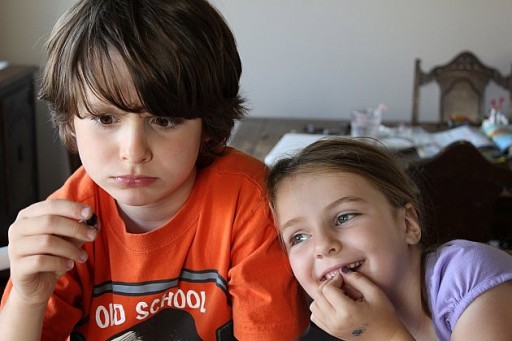 You have about 2-3 days left of prime picking in the River Valley, they are always later in there than my yard, it’s chillier down in there with less sun. The berries are at their peak right now, so take a bucket and go for a stroll! Let the kids eat till they are sated and then take a bucket home. We filled an ice cream bucket in an hour, with eating tons in between. Add in wildlife, the river, other berries to eat, a surprising lack of mosquitoes and we have one heck of a day.

The Still Thinking of Those Baby Cheeks Magpie