Mom Fail: The Reality Behind Our “First Day of School” Pictures

Oh, us Moms. Whether we are bloggers or Facebookers or Tweeters, we have quite a few things in common.

Always going on about how great life is, sharing funny little tidbits from our daily lives.

Always posting the cutest pictures of our children that you’d swear are the best behaved, most adorable children ever.

Always making our food look better than it actually does in real life thanks to great cameras, props and lighting. (wait, or is that just me?)

You know why we are always sharing mainly the happy aspects of our mothering lives, incurring the wrath of others who didn’t have a great picture to share that day or feel like grousing on the internet about how some people only share the good stuff to make their lives look better than yours?

Because sometimes, my friends, the truth hurts or sucks so much that it just drains us to write it or share it..and because sharing the happy stuff reminds us why we shouldn’t strangle our children.

For me, I like to keep things happy and positive on my website, trying to avoid going on internet  rants or causing stress in any way for people’s days. I love you guys, you don’t need another rant post about motherhood or that “banding together mother crap”. (wait, was that a little rant? Like how I snuck that in?) Each to their own.

I want to send you on your way with a fabulous recipe, a silly little tale and a smile on your face. The internet is so full of garbage that I want to brighten your day instead of the opposite.

Today however, I’d like to share the other side of the coin, because it will make me laugh to write this.

It will be therapeutic, cleansing and will hopefully keep me sane until I can have that glass of red wine waiting for me at dinner.

I also think it’s good to share the other side of what goes on in my life every now and again with you all, a way of  “keeping it real” as the over used saying goes.

I’m going to take you through my camera roll this afternoon.

I just wanted to take pictures of the kids on their first day of school, Grade 3 and Grade 5.

Right out of the gate, we can see that my daughter is in Zombie mode from lack of sleep. We are not on schedule. We are all up too late.

And my God, are we paying for it. 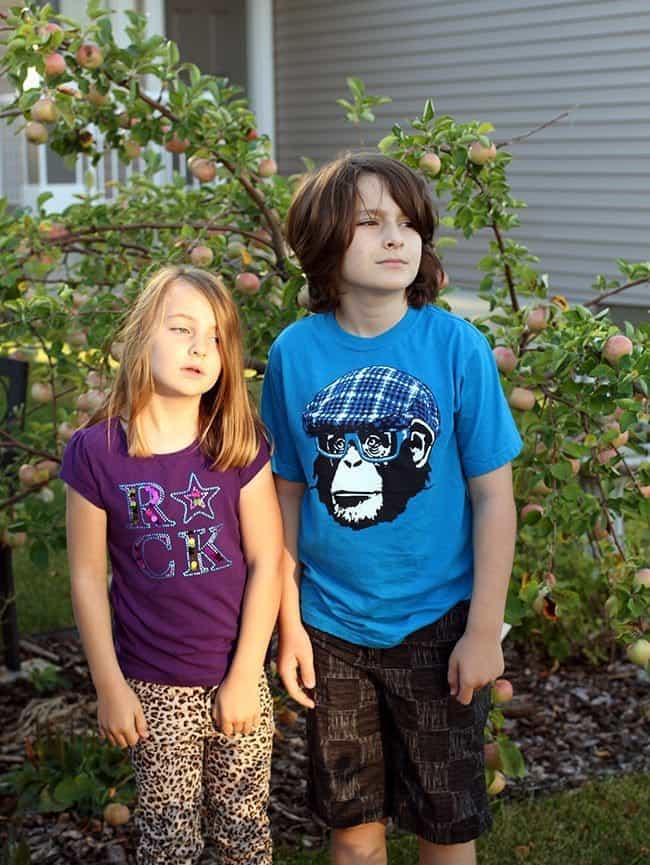 The Princess was in a royal mood this morning. Royally angry. Royally full of wrath.

Her brother merely touching her set her off like fireworks on Canada Day. 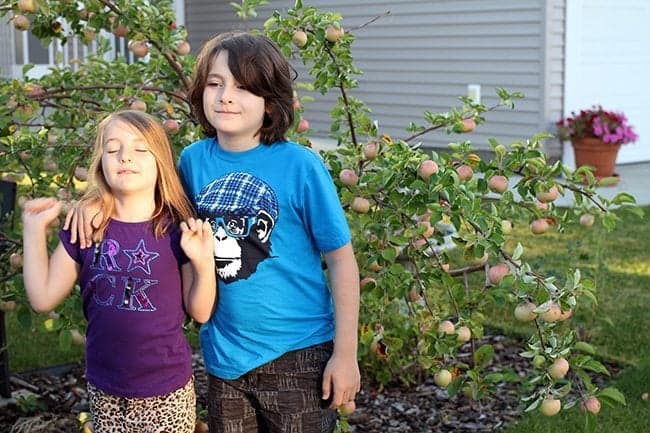 This is the next picture of the kids, I mean kid.

At this point,The Princess is up by the garage, screaming at her brother to stop hugging her.

My response is to holler for her to get back to the apple tree and get her picture taken. NOW! 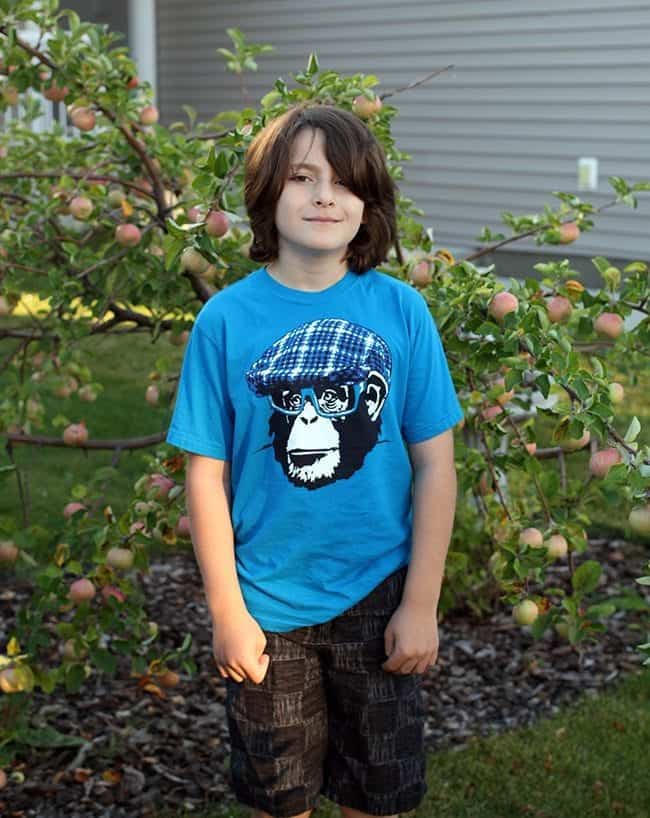 Her big brother hugs her. 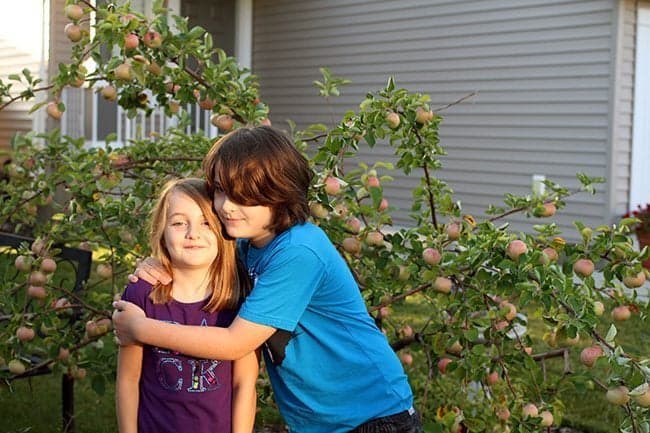 The Wrath of Khan has nothing on this kid.

She flips like a fish out of water, turns to him and screams in his face to ” STOP HUGGING HER!”

I missed the picture where he yells back “ MOM TOLD ME TO HUG YOU!”

I missed the picture because I was too busy yelling ” YOU REALIZE I PUT EVERYTHING ON THE INTERNET FOR EVERYONE TO SEE, RIGHT?”

That threat doesn’t work on them any more. They have no internet shame. 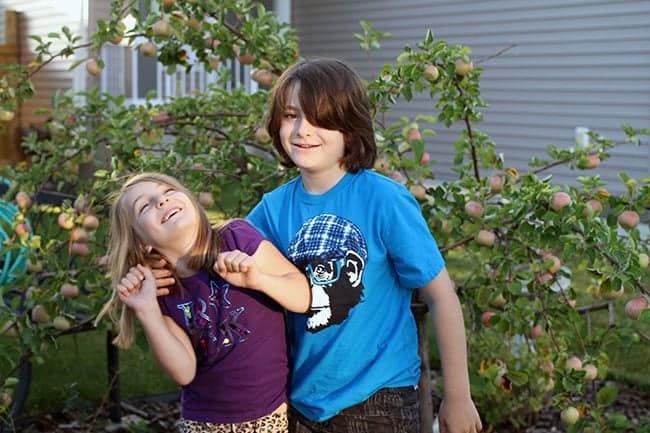 Yelling has stopped and I snap a picture that is worthy of framing…. 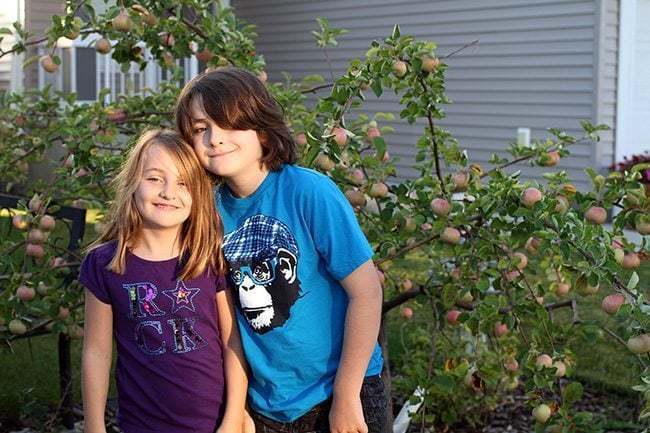 ..right before she decides that Mr K is too close or breathing her damn air or who-the-devil-knows and she starts shoving him around. 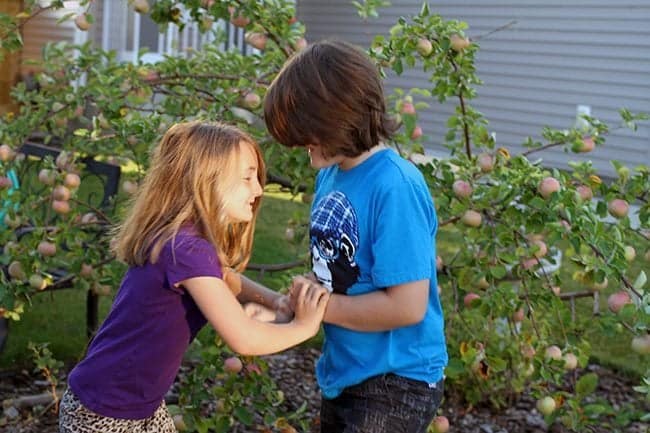 The smack down commences until I finally yell loud enough for them to stop it and pose again or I SWEAR TO GOD YOU WILL LOSE DISNEY INFINITY TIME TONIGHT!

What a vicious cycle. 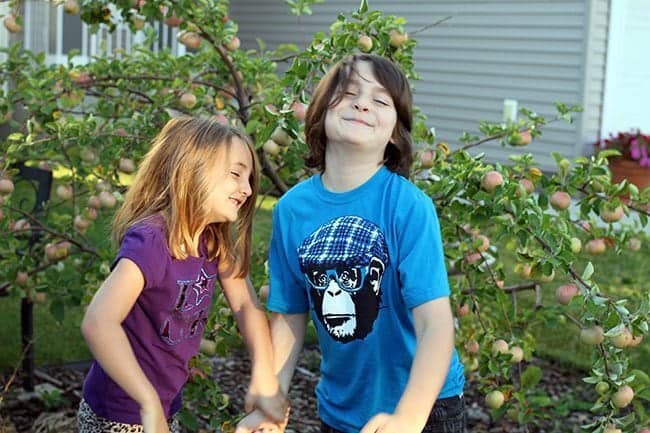 Now that threat worked, since they both love their new Disney Infinity game.

Until Mr K makes the ultimate poor choice and decides to put his arm around his sister again. (see white arrow).

I have no other pictures on my camera after this.

It’s like the end of Blair Witch when you see the figure huddled in the corner.

All you need to see is his hand almost touching her arm and you can envision the rest. 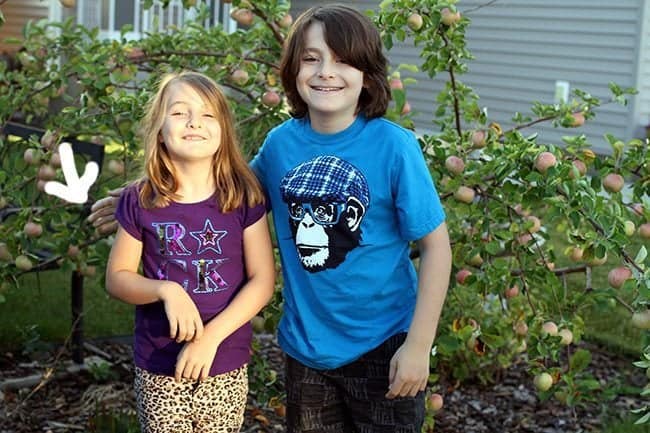 After the Blair Witch worthy ending for my camera, I pulled out my phone and threatened them again within an inch of their Disney Infinity lives that I needed one good picture to send to Dad.

This is what I got.

It only took me threats, hollering and multiple roars of frustration.

THIS is what I posted on Facebook and Instagram. While I really DO want to post the other pictures and say “My children are being JA’s this morning and I’m going to strangle them before we even get out of the driveway and simply tell the school  and police that I am homeschooling this year”… however it’s not always the happiest thing to write, now is it?

I’d rather fully embarrass them with a whole post on my site.

Hey, dudes, I warned their bad little butts this morning. Reap what you sow, children. 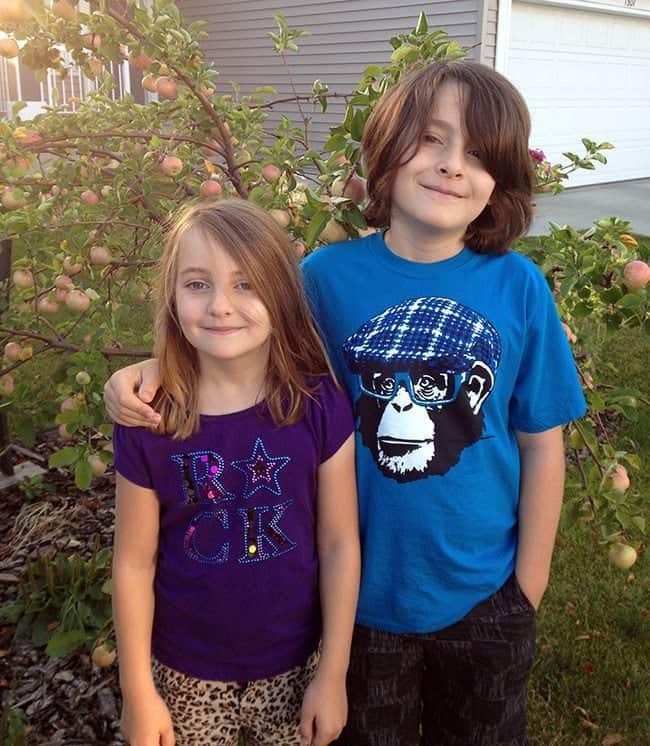 I rounded them up into the truck – early!- and headed off to school only to get stuck in Edmonton’s wonderful construction season for 25 minutes, doing nothing.

Mr K had complained about his stomach feeling weird all the way to school and I had written it off as lack of sleep.

I should have known better.

As soon as we reached the block behind his school, I heard “MOM! Pull over, I am going to throw up!”

I veered to the side, ran around and threw open his door.

Sad to say, that green grass boulevard ain’t ever gonna be the same after that.

So when we add up the picture fiasco that the entire neighbourhood heard, being late for the first day of school and a barfing child two blocks from school?

I am so over this school year and it’s barely begun.

Is It Wine O’Clock Yet? Magpie